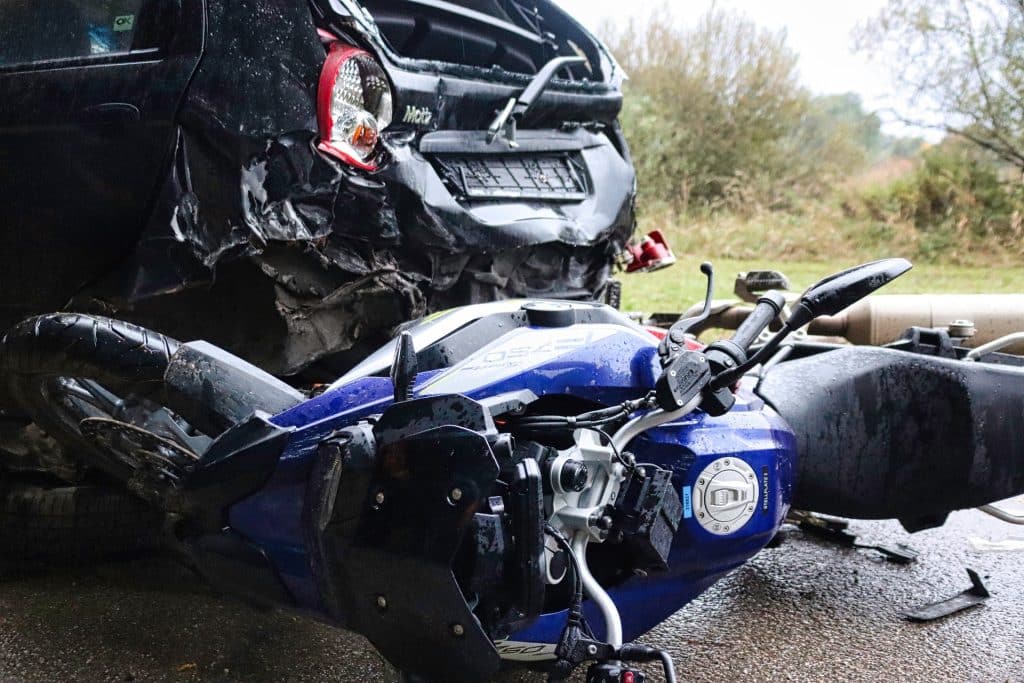 Collisions with motorcycles are common

Intersection collisions are common between cars and a motorcycle. Rear-end accidents are also frequent. This can happen when a driver either fails to slow down, makes an improper lane change, or fails to maintain the required distance when approaching a motorcycle.

The most predominant cause of motorcycle accidents is the failure to observe motorcycles in traffic. The drivers often claim that they did not see the motorcycle or saw it too late. Smaller objects are more difficult to see and automobile drivers do not always make careful observations on the roadway.

Compensation for personal injury after a car-motorcycle collision

Like any other traffic collision, the at-fault party is responsible for the harms and losses caused to a motorcycle rider.

Obtaining compensation for motorcycle accidents can be difficult

First, it must be established that the motorcycle rider followed the rules of the road and is not responsible for the collision. After a collision, the parties often disagree as to who is at fault and witnesses are not always available. The defense attorney, who is hired and paid by the defendant’s automobile insurance company, will likely argue that the collision was not his/her client’s responsibility or that the client should not be held responsible for the full extent of the claimed injuries.

In case of states, like Colorado, with comparative negligence, if the motorcycle rider is found to be partially responsible the value of his/her harms and losses will be reduced by the percentage of fault attributed to the rider. Even when the motorcycle rider has complied with the law including safety regulations, there are circumstances when an injury claim is difficult to prove.

It is important when you are on a two-wheel vehicle to know in advance what you should do in case of an accident with a car.

Documenting what occurred at the scene is crucial to a successful claim for compensation. Photographs from various perspectives and collecting the names, addresses and telephone numbers of witnesses are critical.

Most common injuries from a motorcycle-car accident

Common injuries are broken bones of the lower body. They primarily occur at the upper leg, knee, lower leg, ankle, and foot. Cervical spine (neck) injuries are also common. The most serious, and often deadly, injuries are to the head and chest.

The medical costs associated with a serious motorcycle collision will be hundreds of thousands of dollars. To this cost, one must add loss of past and future income while the injured rider is unable to work during recovery. When the injuries cause limitations to the daily activities of life, such as household chores and recreational activities, this loss can be valued and sought in your claim. Any permanent physical impairment also must be considered because permanent physical or mental impairment make life more difficult.

What to do when involved in a motorcycle wreck

Provided that the accident does not cause a debilitating injury, it is important to do the following things soon after the collision:

1.       Remove yourself and others from danger and check for injuries

If the collision occurs on a high-speed or high-traffic road, the first thing to do is to make sure you are not hit by another passing vehicle. After you are on safe ground, you need to carefully check yourself and others involved for injuries. It is crucial that you place a call to 911 when there is property damage or physical injury.

Also, take a few photos of the surrounding environment. Was the traffic heavy? Was there a hill or other visual obstruction? Photograph any traffic signal, stop sign, yield sign, and speed limit sign. Photograph the intersection. This documentation is useful for dealing with the insurance company or during a court case.

Call 911 to control traffic and to make a written record of the collision. Having an official record of the circumstances by the police or state patrol is most important in determining fault.

Make sure you note the officer’s name and badge number. Make sure all necessary details are stated correctly, and that the contact data of all involved parties and witnesses have been recorded.

Keep calm while you address the other driver, witnesses, or the police. Avoid profanity and aggressive behavior that could create bias against you in the eyes of the law officer and later the jury.

An understandable occurrence is the giving of comfort to the other party by stating “the incident could not have been avoided” or stating “we were both at fault.” Assuming you are hurt and not at fault, do not compromise your case by making statements like, “I should have done this” or “I will be alright.” Of course, you should be kind, but avoid stating inaccurate words you will later regret.

When asked about your injuries, advise of any pain, numbness, or headache and say you are not certain how you will feel later. Should things worsen, report this to the police officer after your medical consultation. One of the most common errors is to state that you are fine, only to discover a few hours later that you are in pain from whiplash, a concussion, or another injury that was not immediately known due to the rush of adrenaline. Keep in mind that the body’s survival instinct causes adrenaline to flow, which can mask even a severe injury.

Although you may be too injured to do many of the items discussed, having witness statements is crucial. Protect your legal rights by noting the contact information, names, phone numbers, and email addresses of all witnesses.

Note the color, make, model, and license plate of the vehicle of the at-fault driver. Calmly ask the other driver for their name, contact information, and insurance company. Anger is a natural consequence, so avoid wild accusations.

You should seek immediate medical attention to obtain treatment and to document your injuries. As soon as the preservation of evidence at the scene is completed, get a medical evaluation of your injuries and condition. Keep all documents that can prove the medical consultation, expenses and your injuries. Turning down an ambulance ride, which will likely be covered by your minimum medical payments coverage or health insurance, is usually a bad idea because the EMTs will assist you and the cost can be recovered from the at-fault driver. The paramedics will provide treatment and document your complaints of pain and loss of movement.

Should you contact a lawyer after a motorcycle accident?

If severe injury or death has occurred, contact a lawyer as soon as possible and follow the instructions given.

The lawyer can help you get the cost of the ambulance paid by your “Med Pay” coverage on your motorcycle and reimbursed as part of your claim.

An experienced personal injury lawyer will help you obtain insurance coverage from the at-fault party, witness statements, and the preparation of your medical file. A lawyer can also help you calculate the amount of reimbursement that is fair for you, with the help of an expert witness if needed.

Keep in mind that the at-fault driver will ultimately be responsible for economic losses for past and future wage or earning losses, the value of household services that you can no longer perform, the billed amount of your medical bills, and the cost of future treatment. The liable party is also responsible for any permanent impairment you may have. This is determined in part by a medical expert who uses the AMA Guides to rate your physical or mental impairment. Finally, you are entitled to the fair value of non-economic losses, including pain and suffering, inconvenience, emotional stress, and loss of the enjoyment of life, such as diminished ability to play golf, tennis, bowl, hike, fish, etc.

Your lawyer will put your mind at peace while you or a loved person recovers from a motorcycle accident, or, while you are grieving the loss of life from a motorcycle accident. An experienced attorney will be able to file a lawsuit, if necessary, to obtain a fair settlement for your case. The adjuster will not fear an adverse judgment if you do not have an attorney. However, 98% of the cases are ultimately resolved without going to trial. This is because with a lawyer you have the leverage to obtain a fair resolution of your case without actually going to trial.

If you wish to make a motorcycle claim, schedule a free consultation by calling 970-241-0707 or you can complete the online application found within the “Contact” tab at the upper right-hand corner of this page. The attorneys and the team of experienced legal professionals at Killian, Davis, Richter & Kraniak, PC are capable, polite, efficient, and understanding.