When you’ve been injured in a car accident, you miss time at work and may fall under the weight of significant hospital bills. This is when you need to be compensated for someone else’s negligence. At Killian, Davis, Richter & Kraniak, PC, we have more than 30 years of experience as Grand Junction car accident attorneys fighting for what you are rightly owed. We deal with insurance companies to ensure that you are treated fairly and our nationally recognized lawyers are prepared to go to trial if it becomes necessary.

It’s something that happens approximately 6 million times across the country every year; a car accident is not uncommon, but is the worst nightmare of most drivers. While most are minor accidents that do not involve injuries or serious property damage, there are quite a few that involve either one or both. Many times, the accident can result in brain or ligament damage, broken bones and even paralysis, which can take months or years to heal, if they heal at all.

Nationwide, more than 32,000 people die every year due to traffic accidents. While total number is high, the rate of motor vehicle fatalities is quite low; there was only one fatality for every 100 million vehicle miles traveled. In Colorado, there were a total of 546 car accident fatalities in 2015.  A large majority of the accidents – 305 – were single-vehicle incidents. So far in 2016, Colorado has seen 435 car accident fatalities. In terms of total collisions, there were more than 120,000 accidents in Colorado in 2015 and 15,574 of them were caused by distracted driving. Contrary to popular belief, drivers aged 21-34 were the demographic with the most distracted driving accidents, at 37 percent.

Grand Junction’s share of motor vehicle fatalities is rather small – just 7 occurred in 2015, with 4 so far in 2016. In total, there were more than 1,500 car accidents in the city of Grand Junction in 2015, involving more than 2,800 vehicles. The most problematic intersection was 12th St. & North Ave., which saw 22 accidents due to its high volume of cars that come through daily. 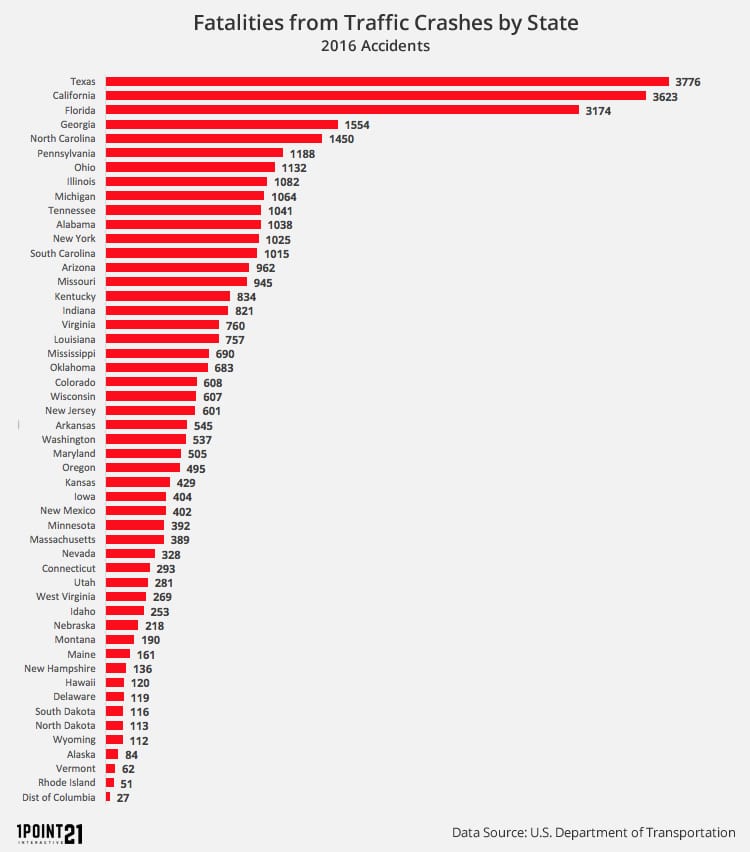 It’s something that has become an increasing concern among lawmakers and other drivers alike; the number of accidents caused by inattentive driving is on the rise, and many see cell phones as the culprit. Meanwhile, other common causes of car accidents such as exceeding the speed limit and DUI have been in decline. Exceeding the speed limit was cited in 19.5 percent of fatal injury crashes in 2011, but only 17.2 percent in 2014. For DUI, it was the cause of 16 percent in 2011, but only 13.8 percent in 2014.

The opposite holds true for inattentive driving, and other things that could be a influenced by it, such as lane violation or failing to yield the right of way. Inattentive, or distracted, driving includes many things beyond cell phone use, such as eating, playing with the radio, reaching for something, talking to other passengers, and grooming. Distracted driving accounted for 683 fatal and injury crashes in 2011, which was 20 percent of the total. The percentage remained stagnant in 2014, but the total number rose to 732. Occurrences of lane violations increased by 18 percent from 2011-2014, and failing to yield increased by more than 20 percent.

Laws for distracted driving – particularly concerning the use of cell phones – differs in each state. In Colorado, the laws are slightly different depending on the driver’s age. If they are under 18, then all cell phone use in any capacity is prohibited. If over 18, you are allowed to talk only, no texting. The exceptions for all ages is if you are using your phone in an emergency.

Approximately 2.3 million people suffers injuries in the 6 million car accidents that occur across the country every year. The most common injuries stemming from a car accident include lacerations, broken bones, mild to severe traumatic brain injury, ligament damage and paralysis. More specifically, In total, more than one million days are spent in the hospital by those involved in car accidents, collectively incurring $18 billion in lifetime medical costs. Car accidents are the most common cause of death for those between 2-34 years old.

Nationally, the injury rate per 100 million vehicle miles traveled (MVT) has been cut in half in the last 25 years. In 2014, there were 77 injuries per 100 MVT, while in 1990 there were 151 injuries per 100 MVT. So overall, the rate of injuries has been trending in the right direction, but that does not mean there isn’t still concern over the things which still cause accidents, such as DUI of alcohol or, in Colorado’s case, marijuana.

It’s been a point of contention with state lawmakers and safety officials since it was legalized, and numerous studies have been done which show results that contradict each other. Two people can even look at the same study and come to different conclusions. There are those that say traffic fatalities have increased, and those that say it has decreased, since marijuana was legalized in 2012. According to the Colorado DOT, the number of drivers who tested positive for cannabis only in their system after a crash did double from 2013 to 2015, from 39 to 68. Two things that are contributing factors to this:

One, Colorado’s population has soared; more than 400,000 people have moved to the state in the past five years. Two, while many drivers who had their blood tested did have marijuana in their system, they were also under the influence of much more harmful drugs or alcohol. Also, marijuana can remain in the blood for days or weeks, so its presence does not necessarily mean that the driver was under the influence of it.
The main concern that many have when it comes to marijuana use is that there really isn’t a way to roadside test whether a driver may be under the influence of it; at least not in the same way law enforcement can test whether a driver is under the influence of alcohol. Law enforcement is being trained in the detection of it through sense of smell and observation of the person’s actions, such as slurring of words, delayed reaction time or red eyes. But in terms of a “breathalyzer” type device to detect marijuana concentration in the blood, that has not been invented yet.

What Should I Do If I’m In a Car Accident?

If you can, it’s important to document everything possible. Take down the other person’s license plate number and insurance information. Take photos of the damage, talk to witnesses if there are any, and file a police report. Diligence is crucial in this regard in case you need to file an injury or property damage claim with the negligent party’s insurance company.

In terms of filing a police report, in Colorado you can do so online if an officer wasn’t present after the accident and if the following is true: there were no fatalities, no public property was damaged, no suspicion of a DUI and the accident was not a hit and run. In the police report, put in as many details as you can.
On top of all this, if you believe you have been injured, it’s important to seek medical treatment right away. While it may take some people a while after the accident to realize they have been injured, go to the doctor as soon as you notice it. If you try to “walk it off” so to speak, then the other person’s insurance, or perhaps even the defense attorney if an injury claim becomes a lawsuit, can say that your injury must not have been that bad if you didn’t seek treatment. This can cause the amount of compensation you receive to drop dramatically.

In Colorado, the statute of limitations for filing a personal injury claim is two years from when the injury was diagnosed and this holds true in car accidents. This is known as the discovery rule, which means that the statute of limitations clock doesn’t start running until an injury is discovered. In other states, the clock starts when the initial injury took place. If a minor is injured, then that person has until they are 18 plus the normal two years to file a claim. The statute provides three years to file a claim for property damage.

Colorado also operates under the contributory negligence rule, which means that the defendant can file a counter-negligence claim to your injury claim if they believe your actions contributed to the accident. For example, you could be hit from behind by another driver causing injury, but if you cut that person off or perhaps failed to signal a lane change then that person can file a contributory negligence claim. If you are found to be partially at fault, you could receive no compensation at all or have it greatly reduced based on the percentage of which it’s deemed your actions caused the accident. For example, if the damages total $100,000 but you are found to be 25 percent at fault, you would only receive $75,000 of that settlement.

Most car accident claims are settled out of court, but can go to trial, and usually does so because of disagreements over emotional damage compensation. Loss of consortium and quality of life are much harder to quantify monetarily than medical costs and lost wages. However, it is possible to keep track of some of it. For example, if you’re the child of someone who was killed in a car accident, you may no longer be receiving financial assistance for schooling, along with a loss of love and companionship. Because of this, you – as a dependent – can calculate just how much support you are losing with your parent no longer there.

If you or a loved one has been injured or killed in a car accident due to someone else’s negligence, we at Killian, Davis, Richter & Kraniak, PC are dedicated and knowledgeable, and will handle your case with the diligence it deserves. Our Grand Junction car accident attorneys have experience in the claims process and in the courtroom, which we use to make sure you are fairly compensated. We don’t collect attorney fees unless we win your case, and your initial consultation is free. Contact us today to schedule your free consultation.

“I was badly injured in a car accident…the dedication and the loyalty that this firm showed me was endless. I believe they are the best attorneys in the entire US and will always be grateful to them for changing the Law and my life.” – Gail C.